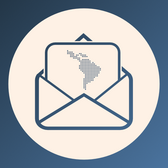 Welcome to Latinometrics. It's great to have you with us. We bring you Latin American insights and tr